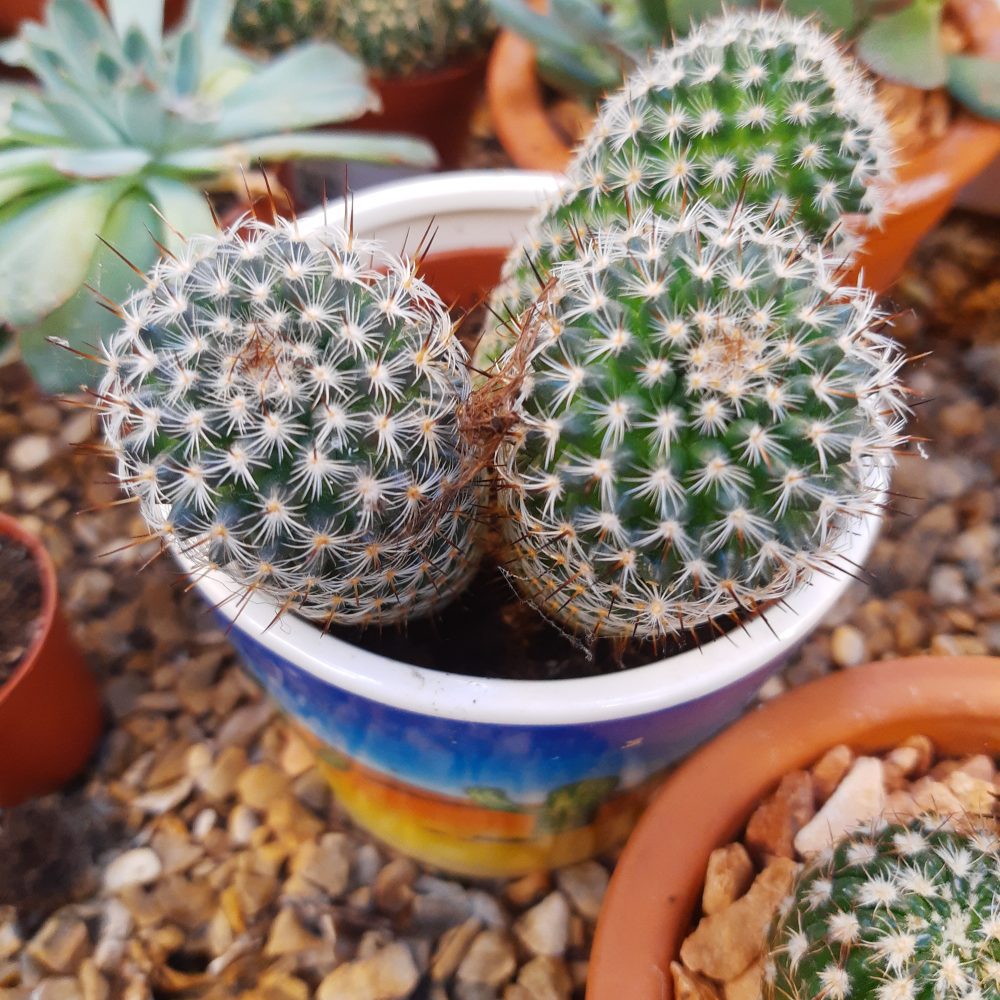 Cacti are a great indoor plant that are low maintenance.

Cacti (Latin family name Cactaceae) are great plants because the look appealing, often bear vibrantly coloured flowers and tend to require less regular maintenance (watering, pruning or feeding) than many other types of plants. There are over 125 genera of cactus and almost 1800 different species.

What is a Cactus?

A cactus is a succulent plant, although many people associate succulent plants as not being prickly. A succulent plant is basically a plant that has developed to be think with a highly viscous core in order to retain as much water as possible during dry conditions. Other common succulents include aloe. though they both have a similar appearance in terms of colour and outer texture. Read more about succulents in the section of aboutplants.com specifically about this family.

How to Care for your Cactus

Because cacti are usually found in arid areas this makes them require less frequent watering. In fact, many varieties survive better being under-watered rather than watered too frequently. We do however recommend that you look after the cactus as intended, ensuring the correct amount or water, sunlight and nourishment are available. After all, plants are living things! When cared for correctly a cactus may live for over 100 years. Some in natural environments that have not been affected by agriculture or developments are thought to live for several hundreds of years.

Cacti, unlike other varieties of house plant are slow growing. This again adds to easier maintenance, but if you would like a larger cactus, they are often more expensive to purchase. Prickly pear cacti (Latin name Opuntia) are larger than most and do look attractive. Prickly pear cacti are prevalent in warmer European areas around the Mediterranean. Several varieties bear fruit. They can grow up to almost 7.5 meters (just under 25 feet).

Although prickly pears are often seen in the Mediterranean, they are native to the Americas and have been introduced to other areas through explorers travelling to and from each region. Most cacti are in fact from the Americas originally. For more information about the opuntia, see the page specifically about this genus.

One of the first things that people think about when the word cactus is mentioned are the spikes. The spikes are actually leaves and the green body can be thought of as a thick stem. Many cacti (usually forest dwelling) have softer ‘bristles’ rather than spikes. These are a good option if you have children or pets that may otherwise be affected by spikier varieties.

How to Handle a Cactus

A cactus must always be handled with care. This is to protect you from the spikes and the plant from accidental damage. Very few are directly poisonous when people are pricked by the spikes, but many people have an allergic response which can vary in severity. Also, any puncture wound to the skin can allow organisms and foreign substances to seep into and through the epidermis (the upper layer of skin), which is above the dermis where glands, nerve endings and hair follicles are present.

Ideas for Cacti in your Home

You can also create an indoor rockery using two or three different cacti suited to the same environment intertwined with rocks. A dark Welsh slate makes a very modern indoor rockery with cacti – the green offsetting the grey in a tasteful way even though naturally, the two would not be likely to be found in the same location. See more facts about plants by using the above menu.

Cacti and other Succulents.

Cacti have evolved over time to live in some of the most harsh environments in the world. These environments are subject to extreme temperatures as well as arid conditions, meaning that each plant needs to maintain hydration in a specially adapted manner.

Why do Cacti have Spines?

Cacti are succulents. Cacti have spines which are their leaves which have become adapted to help them to stained life in arid conditions. The spines are in fact leaves and have been formed over many years as part of the evolutionary process. The main part of a cactus is the stem. This stem has a large mass to help maintain hydration. Having a larger mass to surface area means that water does not evaporate as quickly from the plant as it would do from other plants with leaves that have a large surface area compared to their overall mass. In most plants, the leaf is the main part where water evaporates. Some gardeners award prices for the length, width and style of spines on each cactus. This is the way that a particularly good example can be demonstrated and it is not always by the size or shape of the cactus. Vibrancy, abundance and size of flowers are also particularly impressive features.

The spines although ornamental when prizes are issued at shows are a form of defence for the plants in the wild. The spines prevent animals from eating the succulent plants and this is especially important in dry areas where animals will be savaging for sources of hydration as well as nutrients for themselves. Cacti are relatively easy to maintain and do not require the same level of input as other house plants. However, looking after certain cacti and other succulents can be difficult because people tend to over water these plants and in fact a critical amount of water is often needed, which can be much less than people assume.

If a cactus is exposed to freezing temperatures this can be detrimental to the plant and is likely to kill the cactus if the exposure is for any significant period. This is due to the relatively large mass of the stem, which can freeze without being able to be thawed quickly and this can kill the cellular infrastructure inside the main part of the plant.